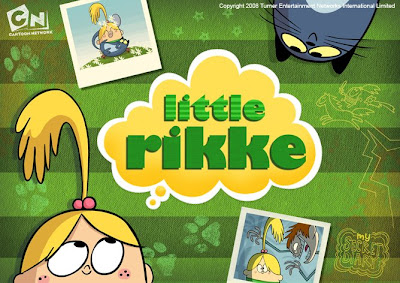 Hey Chris, I saw this on CHF and it blew me away! Great work mate, you have the dream job!

Wow those look great Chris!
Congratulations! The end credits has such great feel. It's amazing to finally see these, and I can't wait to see the rest of the stuff you all have been working on there at CN.
Pass my compliments along to Rikke and the rest of the crew.

I'm intrigued. Hope to see more of this soon!

the whole project has a great look to it. The characters have a lot of personality, love how they animated the walk on the scout troop - how they bounce up and down. Its nice to see rendered backgrounds too, so much stuff today tends to be flat and graphic - while thats good, its a nice change to see some rendering. Hope it gets picked up, great job!

Hey, i was lucky enough to see this in production last year, when i looked around the development studio with Jen. Its a really great piece of work, congrats to you and Rikke and team, hope it gets picked up!

Hey Chris - nice work, I totally understand the process and satisfaction after creating something for an animation pitch! You rock! Keep making kick ass cartoons for the kids, they need them and so do us adults - would love to work for the CN Development team in Soho!

nice job chris one more time u have make an awesome job. im still studying Animation and practicing ilustrations to make someday perfect art like u. i think this year im gonna travel from Venezuela "where i live" to España for study cinema animation . cheers, if u can helpme with some tutorial i would be happy.

Great job Chris, It looks like a really interesting show the animation on the scouts is brilliant .

I also saw this on the Cold Hard Flashies and really dig it!!

Thanks a lot everyone!

I have seen it through Sylvain Marc's blog, you can be proud of it Chris ! What about your other upcoming contribution in some other secret project ;) ?

off the chain...I love it, really with you could share the Animatic...cheers man. great stuff

wonderful work. I love the whole feel of this. I'd love to see this on tv.
great work one and all

wow so much awesome art here!

Hi Chris! Hope this one gets a pickup...it's looking fine.

We finally put your link on our blawg.
See ya!

Thanks so much everybody for the great feedback. Sorry I've not posted in a while. I've been crazy busy at work. I'll post some tit-bits soon, but hopefully later in the summer I should be able to post all the stuff I've been up to at CN this year, so please bear with me!

Very good feel and wonderful colors! I'd like to see more!

Man this is so what cartoons today need. CN would be crazy not to pick this up. Really, really excellent style.

If they have enough talent to create new programming in a different style for kids, they should be making a new network that would serve as a generalist: TBS Kids, TBA, TNBA; or add more kids programming to the CW. Frankly put, Cartoon Network should not be Turner's generalist unless the reality shows are animated. Search Cartoonnetwork

Wow, sounds like you may well have just about the best job in the world.